Lake Bohinj is located in a glacial valley and it comprises almost 100 million cubic metres of water – according to an old Bohinj joke: no more than a bucket if it is large enough.

Distance from the hotel: 90,5km

Lake Bohinj is located in a glacial valley and it comprises almost 100 million cubic metres of water – according to an old Bohinj joke: no more than a bucket if it is large enough. The steeply descending lake basin is relatively smoothly shaped and has no shallow areas. In summer, the temperature of the water rises to 22 °C; in winter, the lake often freezes. Water level rises 2 – 3 metres after heavy rainfall.

Lake water is restored three times per year. The main tributary is the Savica, and the main distributary is the Sava Bohinjka. More than a third of the water flows into the lake from the Karst springs under the lake surface along the northern shore. During heavy rainfall, the Karst waters gush out as the Govic spring on the Pršivec hillside. 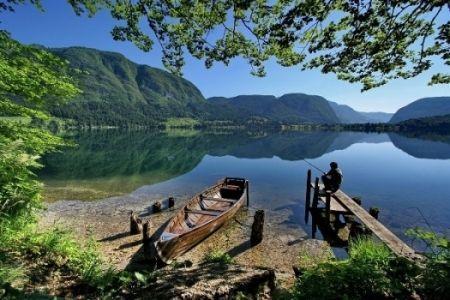 At the end of the last glacial period, Lake Bohinj was about 18 metres higher, extending all the way to the village of Stara Fužina.

There is a lacustrine chalk deposit between the hamlet of Sveti Duh and the Pod Skalco event area.

To the south side of Sveti Duh, there is also one of the few quartz porphyry deposits in the Julian Alps.

Jezernica, the second shortest river in Slovenia, flows from Lake Bohinj, and after it joins the Mostnica river (100 metres from the bridge), it is called the Sava Bohinjka.

Lake Bohinj is perfect for water activities all year round – from swimming, boat riding, wind surfing, kayaking or canoeing, fishing and diving in warmer months, to (sometimes) even ice skating in winter. Visitors can also take a wonderful tourist boat ride or simply go for a relaxing walk along the shore. 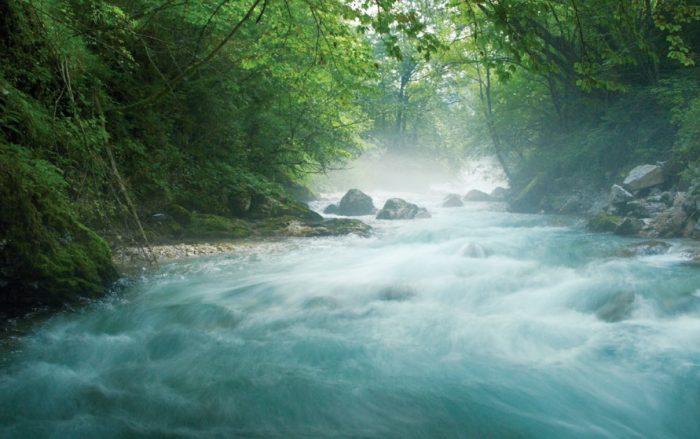 HOW TO GET TO THE SOURCE OF THE BISTRICA RIVER?

From Bohinjska Bistrica past the hamlet Pozabljeno (marked), from the village Žlan (not marked), via Rebro (where you can also visit a cemetery from the World War I). Once in the hamlet Pozabljeno in Bohinjska Bistrica, follow the signposts. The forest cart track with visible remains of a formerly paved road is suitable for walking and mountain biking. The whole length from the source takes approximately 45 minutes of easy walking.

You can prolong the trip by one hour and a quarter (and make it even more beautiful) by crossing the bridge over Bistrica and following the unmarked hunter’s path to a steep pass above you. Once on the summit, you will see spread before you the meadows of Čibrovica (716m) crowned with the majestic range of the Julian Alps in the distance. Follow the cart track towards the valley via the meadows of Dobrava all the way to the hamlet Pozabljeno.

Sava Bohinjka is a river noted for its fascinating wild beauty. The source of this predominantly pristine river is in the Triglav mountains. It has a turbulent flow and changes several names before it becomes Sava Bohinjka. The Sava Bohinjka river is an attractive destination for the lovers of water-related activities.

One of the two branches of the upper Sava river basin is Sava Bohinjka which carved its bed in the heart of the Julian Alps. The upper part of its flow (to Laški Rovt) is also protected as part of the Triglav National Park.

The section from the source to the point where Sava Bohinjka gets its name is very rich in water as well. The water from the Triglav mountains comes out in the valley in form of the most visited Slovenian waterfall, the 71-metre-high Savica Waterfall. From underneath Komarča, the water continues its path as Savica into Lake Bohinj. It flows out from Lake Bohinj under the famous bridge by the Church of St. John the Baptist as the Jezernica river which is joined after only a hundred metres by the mountain stream Mostnica. It is only here that it gets the name Sava Bohinjka.

The Sava Bohinjka river is fascinating due to its relative intactness. After 150 metres, it penetrates a limestone ridge through a short but picturesque gorge. It then continues at a fairly steady pace towards the east past the villages of Bohinj area, past Bohinjska Bistrica (where it is joined by Bistrica) and over the gravelly layer of glacial flood material all the way to Nomenj. Here it turns towards the north and continues at a slightly faster pace through a torrent-defined Soteska between Jelovica and Pokljuka. Once in Bled, it turns once again towards the east where it soon meets its “sister” Sava Dolinka under the dam in Radovljica.

Savica is one of the most impressive and one of the biggest waterfalls in Slovenia, fascinating with its primal energy. Bursting out of the steep rock wall under the wild Komarča, it represents both the beginning and the end of the Bohinj valley.

The Savica Waterfall is the source of the Sava Bohinjka, known under the name of Savica to the spot where it flows into Lake Bohinj. It is one of the must-see sights for Bohinj first-timers, and it is very possible that you will join those who visit Savica each and every time they come to Bohinj. 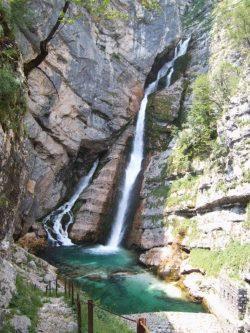 Savica is very unique among world waterfalls – its watercourse is divided into two parts in the hidden undergrounds. The famous A-shaped waterfall normally comes into sight at an altitude of 836 m and is 78 m high.

It is fed by the waters from the Valley of the Triglav Lakes and Pršivec that flow to it through a horizontal cave tunnel. The Karst cave with the source is full of siphons and lakes, and is only accessible with a guide and proper equipment.

On foot: Follow the marked path from Zlatorog Hotel to the Koča pri Savici hut (about an hour’s walk).

With car, bus or bicycle: Take the asphalt road from Ukanc (4 km) to the car park next to the Koča pri Savici hut. Continue your way, passing the Dom Savica restaurant and crossing the stone bridge over the Mala Savica, where a fee for trail maintenance is to be paid. Go along the trail (of medium difficulty level) leading over the gorge of the Savica river, and follow the stone stairs to the hut with a great view. The walk takes approximately 20 minutes.

If you want to reach the source in front of the cave, take the path that branches off the one across Komarča (Ukanc – Črno jezero), cross the bridge at the Koča pri Savici hut, then turn left towards Komarča and soon turn right towards the source. 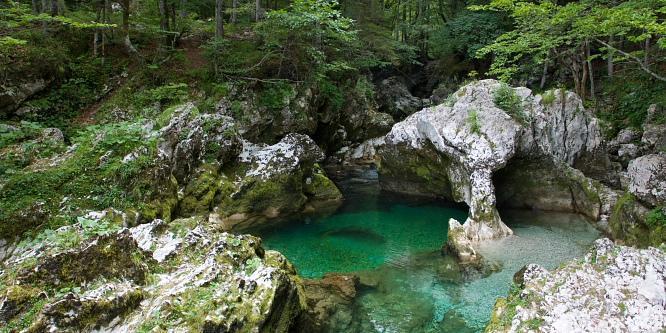 The mountain stream Mostnica has its source in the Alpine valley Voje in the Triglav National Park. On its way to Stara Fužina, Mostnica carved a 2-km long and 20- to 1-m wide gorge called Mostnica Gorge. 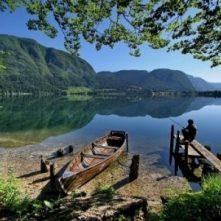 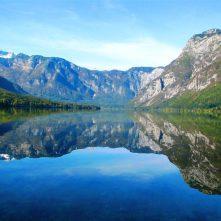 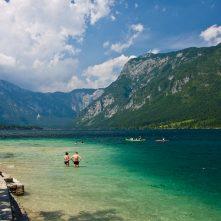 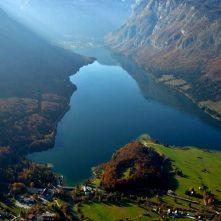 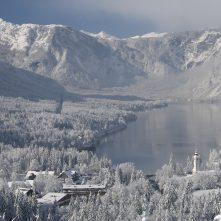 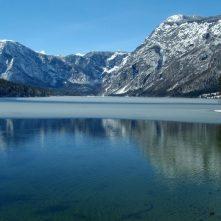 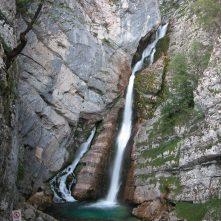 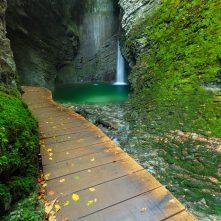